Electronic boilers are a popular choice these days because not only are they eco-friendly and more energy efficient than conventional boilers but they can even be operated remotely from your smart phone enabling you to switch your heating on or off and adjust the temperature for your home no matter where you are.

Electric boilers have many advantages, one of them being that since no flue is required they do not release toxic fumes or combustion gases such as carbon monoxide making them less of a safety hazard. In fact, if you have an electric boiler you do not have to have it serviced once a year as you would with a conventional gas boiler, since there is no risk of them ever leaking these fumes which can be extremely dangerous if not taken care of or detected quickly enough.

You are also unlikely to experience the same problems that combustion boilers present such as gas venting, faulty pilot lights and back drafting.

As well as being a much safer option they can also spell good news if you’re trying to keep your energy bills down, since their energy consumption rate is low whilst still producing fantastic results.

Conventional gas boilers have the disadvantage that they lose a lot of the heat produced by burning to the surrounding air or up the flue.

It doesn’t stop there, the fact that they make little or no noise definitely works in the electric boiler’s favour, Unlike conventional boilers they do not make noise every time they heat the water. Also since they have few moving parts, they are relatively easier and cheaper when it comes to having them serviced.

If electric boilers are safer, quieter, cheaper to run, more compact and eco-friendly, what are the downsides?

The main disadvantage of electric boilers is that they may not be powerful enough to produce hot water for large households, because they can only heat limited supplies of water at a time. If a large house is not an issue for you, then electric boilers are a great heating solution!

If you like all that you’ve read here and are interested in getting an electric boiler for your home, there’s no need to wait 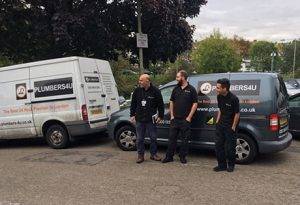 Plumbers4U provide outstanding emergency plumbing services across London and all nearby areas. You can expect a fast & efficient service from us every time – guaranteed! Our flexible approach, competitive plumbing prices and lightning 30-minute response rate makes for a winning combination, every time.

Want to learn more about Plumbers4U? Head to our About Us page!

For all your plumbing emergencies.

Do you charge the same rates for any plumbing services?

Yes, we offer the same labour rate for plumbing and heating services between working hours 8am-5pm.

Any emergency work after hours will be higher rates.

Yes, we do offer an emergency plumbing and heating service after hours. The only issue after hours that if any parts needed, we will have to supply it the following morning but most issues we can fix at the first visit even after hours.

If I got just a small leak and its small non-emergency plumbing work would you take small job?

Yes, we provide service for any type of job big or small. We prefer to fix the problem when its small before it become big and costly job.

Yes, each one of our team members is licensed and insured. Also, we provide 6 months guarantee on all our workmanship for a peace of mind.

Do you provide commercial work?

Yes, we do have a team for commercial plumbing and heating work with all the right qualifications.

Do you provide onsite gas safety inspections or CP12?

Yes, we will come to the property to carry out a boiler yearly inspection. We can arrange to return on an annual basis to ensure your mandatory landlords inspections are conducted as per the LGSI mandatory requirements.